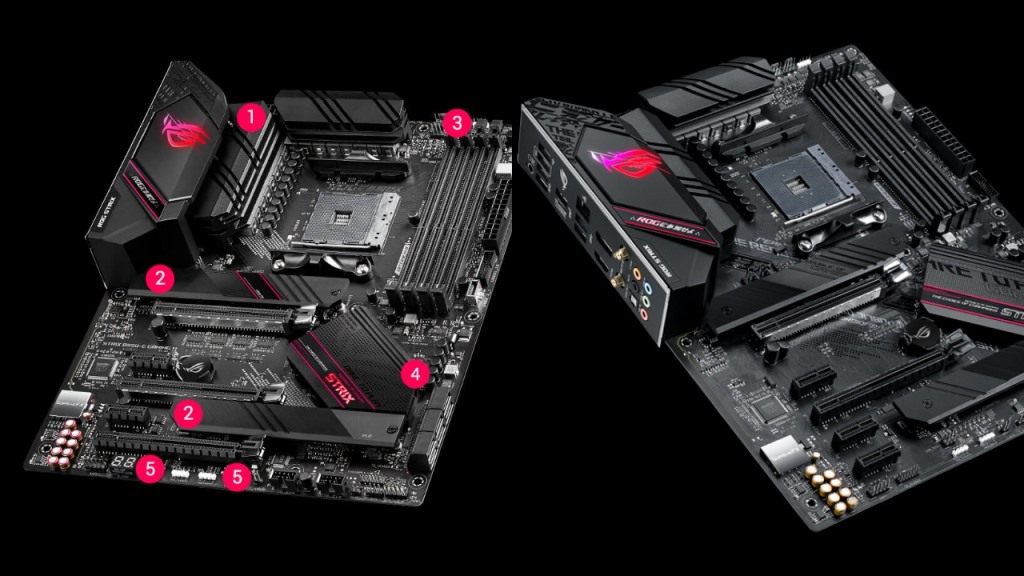 The ROG motherboard has always been in demand in the market. Republic of Gamers or ROG was formed in coordination with professional gamers to come out with outstanding products for gamers and users of different kinds.

You can find the ROG model working effectively in most of the market sectors. It could be laptops, gaming phones, and even headphones. No surprises in there. Having said that, we have two phenomenal gaming motherboards to discuss about in this review.

Today, we will be reading about the Asus ROG Strix B550-E vs B550-F Wi-Fi gaming motherboard. The units offer you similar features, and most of the aspects are almost the same. This leads to confusion among several users in choosing which motherboard to purchase.

We may want to understand them better so that we will make a wise decision in the end. Consumers will want to find out what they have to offer and the differences between the two. These two models were released in the market in June 2020.

That is quite interesting to note because they come in different price ranges. One wonders what the marketing team of the Taiwanese manufacturer was thinking when doing that. For Asus, the Strix brand of models has always proved to be a success.

Thanks to that, the Strix-E and Strix-F Wi-Fi versions were released into the market. The main difference between the E and F unit is that they come with Wi-Fi. Besides, they are other changes, including the connection possible without using the cable.

This is a breathtaking feature of the B550-F Wi-Fi motherboard. The Asus ROG Strix B550-E gaming motherboard comes with a sublime foundation and comes with massive power delivery solutions 14+2 stages.

You can also find the M.2 connectors, Intel 2.5 Gigabit Ethernet, and wireless networking Wi-Fi 6 adapter. There is also the SupremeFX audio, AURA RGB support, and additional features like the AI microphone.

The B550-F Gaming Wi-Fi comes with a 12+2 stage design. Has the manufacturer done the right thing by cramming in most features found on top-end X570 boards into them? These are two premium model from Asus has it all.

Can the reduction of the price on the B550-F Wi-Fi work for it in the end? Let us read the review to find that out. 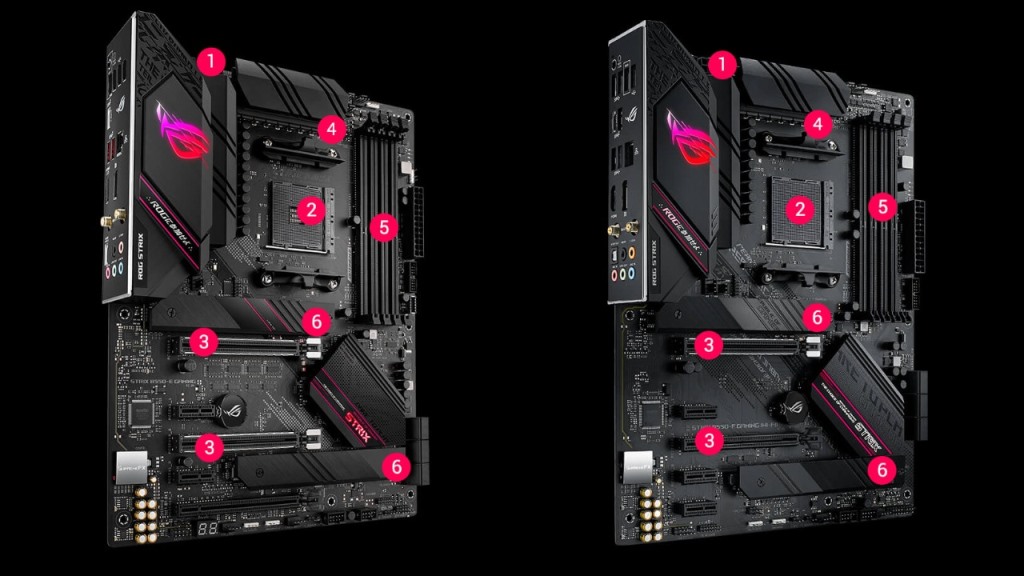 The features & layout of the motherboard are one of the most vital things. Users need to feel comfortable when installing the board for designing their new PC. Nobody likes getting stuck when creating a new PC.

This is mainly for newcomers. Luckily, the Asus ROG Strix B550-E gaming motherboard comes with an opulent layout. Even new users can find their way through and get started in no time. Our tester was able to breeze past through everything.

The unit comes in a nice layout and splendid features embedded in it. You can find a typical ROG design having black and light grey tones on it. You can also find small lines of red color on the motherboard.

There is a substantial rear I/O cover that can be found on the motherboards. You can notice that the Strix B550-E board is relatively denser than most of the similar designs found on Asus models. Yes, there is the RGB available on it.

The unit appears quite unique and elegant. We did expect that from the Asus ROG models. The control availability is very much there, and you can use it to control any partnering hardware. The unit does not come with a backplate.

Our tester found that missing quite weird because most of the boards in the same price range come with that. However, they went for ROG branding. We did not find it quite exciting. Interestingly, both B550-E and B550-F Wi-Fi motherboards come with a 6-layer PCB that ensures that the unit works sublimely.

There is also adequate support for the intense high-speed memory that goes more than 5GHz.You can also find that the front panel USB 3.0 5Gbps headers are close to the 24-pin connector.

The B550-E unit also comes with the internal USB Type-C header fed by 10Gbps ports. This comes quite handy for the additional pricing of the unit. We also noticed that the unit comes with a 3-pin addressable RGB header.

This is not found on the B550-F Wi-Fi unit. Having said that, we did not see onboard power reset, CMOS buttons, and onboard voltage measuring. These were slightly worrying. Of course, users do not have to be concerned as the motherboards can provide you with powerful functions.

There is the 4-pin RGB header at the top. On the Asus ROG Strix B550-F Wi-Fi, most of the features found on the B550-E unit are found on them. We have clearly mentioned them. Overall, the features provided and the setup are stunning for new users too.

Does the Asus product come with any flaw or drawback? Sadly, they do. The main complaint from few reviewers was that the Asus support was short of exemplary. We can understand that. When you are jammed up and call up support, you can get things done yourself.

Perhaps, the best option would be to take the help of a friend who knows how to handle the board. During the Windows 10 operating system installation, the Ethernet and Wi-Fi did not work as they should have.

But it is too hard to ignore the Asus ROG Strix motherboard. 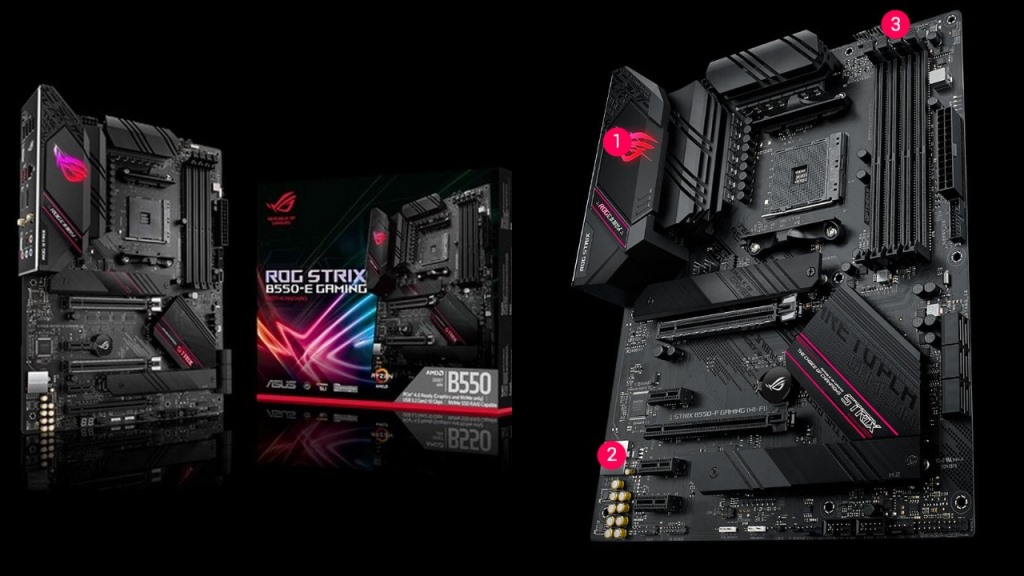 The software and hardware of the motherboards matter. Users can operate using the functions provided. The B550 board is a second version of the AMD latest 500-series chipsets. We can safely say that none of the significant features present on the X570 chipset are missing.

The software and firmware of the Asus ROG Strix B550-E gaming motherboard are very exceptional. The smoothness of the software needs to be mentioned here. Our tester worked using it on a Ryzen 3900X CPU along with the stock fan and was blown away by the performance.

This is a gem of a board coming with PCIe gen 4 NVME SSD. He also felt that the BIOS was relatively easy to work on for new designers too. If you are a new PC designer planning on making one, then this should be your best option.

The M.2 implementation of the bandwidth could have been done better. We also felt that they could have offered a secondary M.2 dedicated PCIe lane from the motherboard. You can make use of the final 2 SATA ports for other connections.

This immensely helps gamers to install the SATA drivers correctly. These can cause the NVMes SSD to slow down. On the other hand, the Asus ROG Strix B550-F Wi-Fi board comes with slot spacing that is a feature on the unit that comes well done.

It is a CPU-fed M.2 slot that comes with a decrease in the PCB trace distance. We noticed the chipset-fed slot is quite some distance from the hot graphics card. There is also an aluminum heatsink having a solid thermal pad cover.

You can see the M.2 slot. The slots come quite simple to access using the graphics card installed. The B550-F Wi-Fi comes with a second slot using the PCIe Gen 3 x4 and shares bandwidth and x1 connectors.

The B550-F Wi-Fi makes use of the ASUS SupremeFX audio solution on the SupremeFX S1220A audio codec. The same can be found on the B550-E model too. The AI microphone does an exceptional job in filtering the background music.

We noticed that the B550-F Wi-Fi model comes with 6 4-pin fan headers having 4 that can be easily reached from the CPU socket. 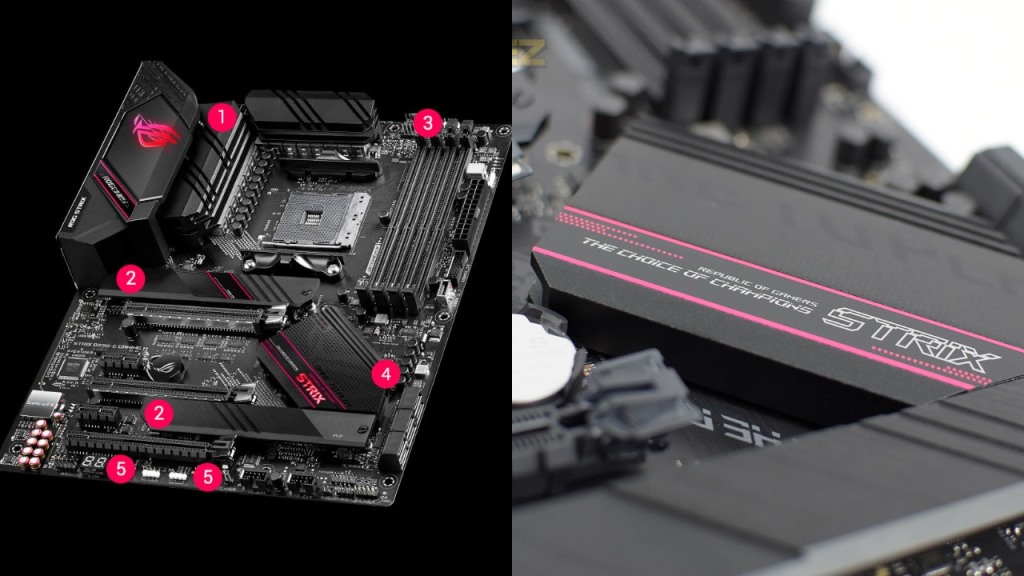 We found the B550-E board having the temperature sensor reading for the VRM. It is quite noticeable that the Taiwanese maker has provided the display VRM temperature readings. We do want to mention here to that the B550-E came with load line calibration options, which do not seem to have any significance on what they are doing there.

A proper explanation of things would have been greatly appreciated in there. Besides, our tester also found that Wi-Fi seems to be mood out sometimes. Though he installed most of the drivers, the PC gets plugged, the Wi-Fi simply stops working at times.

Even a few users have raised this issue online. Of course, you can get it back just to reconnect your router. But this is how the way things stand for the moment. This should not be a major or significant issue of any sort.

We wanted to just point that out in an otherwise sublime gaming motherboard. However, we did not find the temperature sensor reading for the VRM on the B550-F Wi-Fi model. Our tester felt that it could have had this vital feature on it since this is a top-end motherboard.

The manual readings of the VRM temperature were taken. The VRM temperatures on the B550-F Wi-Fi were suitable. They were quite exceptional and excelled at stock and overclocked levels. Our Ryzen processor was able to perform at 4.25GHz.

The B550-E unit has 16 stage design infused along with a new Digi+ PWM controller. We did notice that the temperature can be high at certain levels; it was quite acceptable. Likewise, the temperature level for the B550-F model was sublime. 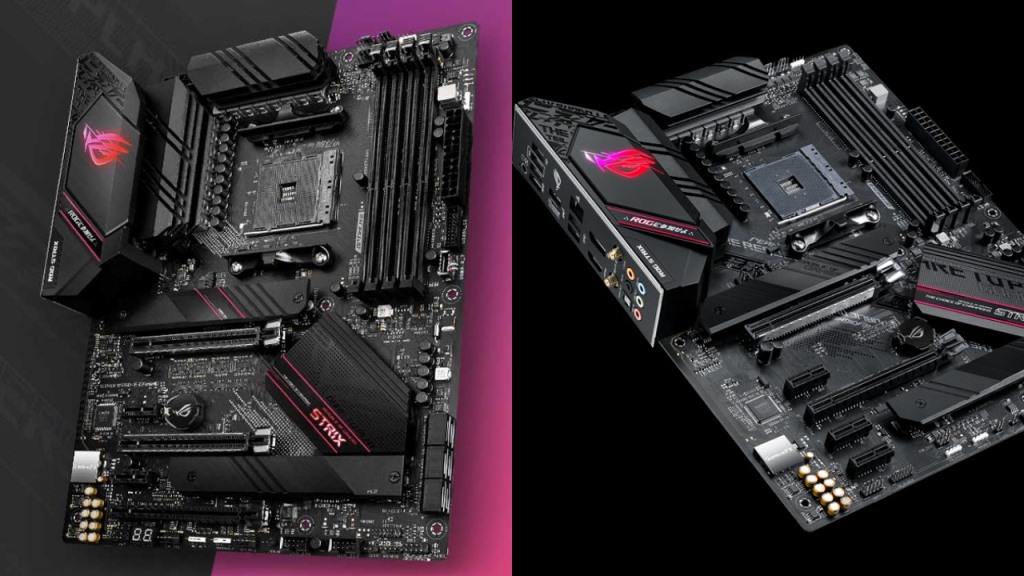 It is a massive upgrade from the earlier Asus Strix B350-F. You can easily swap the motherboard and the NVME storage. The VRMs are splendid and work effectively much better than cheaper X570 boards.

The Wi-Fi is exceptional, and you can just about do anything you want to. When you are not convinced about the X570 motherboard, then you may want to consider this one. The board is slightly expensive when you compare it to the MSI X570 MEG Tomahawk.

The B550-E is a solid option when you are keen on using an Asus board for your new PC design. The board will not disappoint you at all. Likewise, the B550-F gaming is another exciting option for a motherboard.

It is much cheaper than the B550-E unit. Considering the features infused on the board, they both are almost on par. The B550-E is slightly powerful and reliable, but it is much more expensive than the other model.

You lose the USB 3.2 Gen 2 port on the rear, PCIe configuration PCIe 4.0 x16 panel and the board uses 12 phases CPU than 14. You can find the 2.5 gigabit Ethernet and the same SupremeFX audio.

The Asus ROG Strix B550-E gaming motherboard is a sublime unit as the model comes with exciting features like it is effortless to reset the BIOS, 1 more PCIe 4.0 x16 slots, and 1 more USB 3.1 Gen 2 port.

Users have commended it on how effortless it is to overclock, comes with 4 more USB 3.0 ports, and has 0.9 more audio channels. You will be delighted to know that it has S/PDIF out port and comes with 1 more PCIe x1 slot.

On the other hand, the Asus ROG Strix B550-E gaming motherboard is compatible with Nvidia SLI and has an integrated wireless LAN support. You also get Bluetooth support, three more USB 2.0 ports, an extra USB 3.2 Gen 2 port, and a different PCI-E x16 slot.

In the Asus ROG Strix B550-F Gaming motherboard, the price is significantly cheaper than Asus ROG Strix B550-E. Furthermore, its RAM support is higher, ranging up to 5000Mhz, and it offers an extra PCI-E x1 slot as well, compared to its counterpart.

Our winner, based on the review, is the Asus ROG Strix B550-F Wi-Fi gaming motherboard.