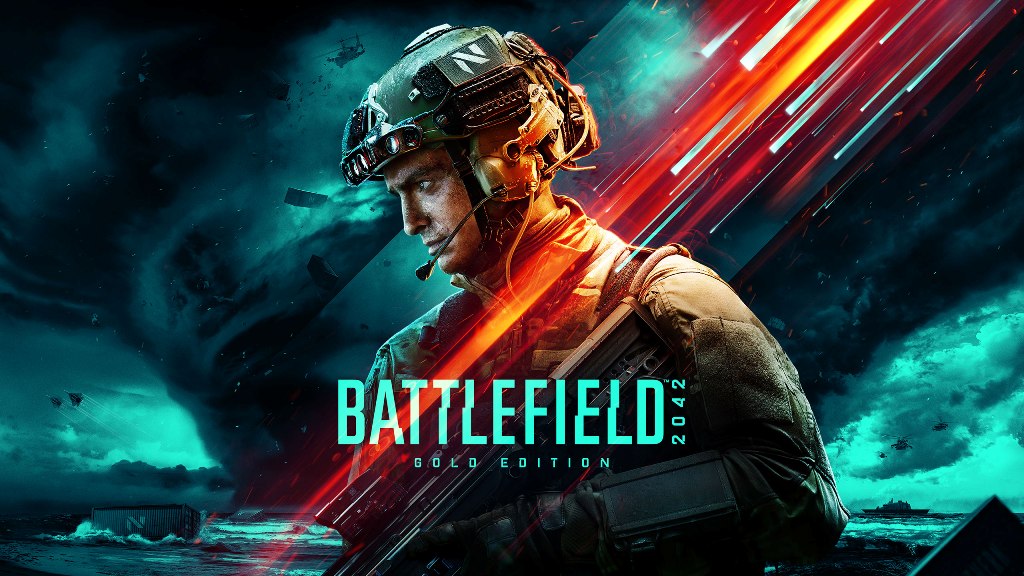 Battlefield 2042 has been released to play on your PC devices and gaming consoles. There are some differences that may separate them because of the power differences. You can play the game on your PC to a greater effect because of its visual appeal.

That is because it is the same as found on your PlayStation 5 and your Xbox Series X gaming console. The game comes with immense visual effects, and there are plenty of 128 player lobbies.

That is when you would want to find the proper balance in the gaming settings. However, that is easier said than done because the game consumes a lot of power. That is why we have compiled this post just for you.

These can help you to run the game at full capacity. Before we move further, you would want to know that the release of the Battlefield 2042 game was a complete disaster. Yes, it is correct. There were plenty of issues with the settings, optimization, and connectivity.

As we read through some of the posts while preparing this article, we learned that the game had some problems on working with powerful gaming PCs as well. Though these minor issues have solutions, they may need more time to get repaired.

What are the Battlefield 2024 system requirements? 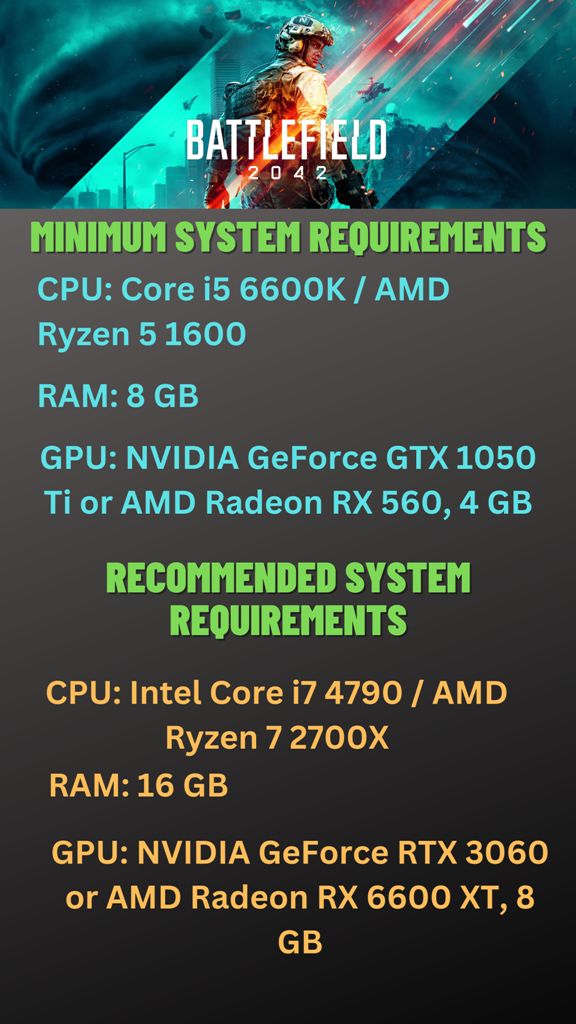 We did not mean to scare you. Many games have these issues, and they can run possibly well on your PC device. You may require the help of a GeForce GTX 1050 or a Radeon RX 560 GPU model for your PC device to work well.

Your PC machine must be able to meet the minimum & recommended requirements by having GeForce RTX 2060 or a Radeon RX 5600 XT GPU to have a good gaming experience with this fantastic FPS title.

As a professional gamer, you can be confident that Battlefield 2042 can battle it out with these issues pretty well. As a player, you can take in charge of the vehicles, the army, and your helicopters to defeat the enemies.

Yes, the earlier version of Battlefield was not convincing and quite dull, to say. But this one looks pretty elegant with eloquent specifications that can provide you with fantastic gaming. However, you would need to have tremendous specifications to conquer your enemies.

As a game, you will obviously see for the most critical settings in Battlefield 2042. Using them can provide you with the best impact on your visibility and performance in the game. Since the game is a multi-player FPS one, it can get a maximum FPS maintaining good visibility.

The screen settings of the PC are critical for ensuring that the game is played in the kind of environment you seek. Please note that the settings will not affect your gaming performance but might only slightly enhance the graphics settings and your experience.

The full-screen mode can help you play the game more convincingly. Using this setting, you can play the game borderless and use the Windows screen impeccably. You might want to have your screen in this setting.

You can also choose the resolution of the screen according to the size of your monitor. You can effortlessly change the setting to your monitor’s native screen resolution. This was just an option that you could either choose or not to.

The field of view is a personal choice, actually. You can scale the FOV to 90 but also modify it to 120 when you want.

This kind of setting enables you to change the FOV to a third-person camera when you are seated in your vehicle. It helps you to view around on the visibility that is around you. You can keep an eye on the attacks near and around you.

If you use the ADS FOV, you can easily view all your weapons and another armory. This is a user-defined FOV, and when you turn it off, it becomes into a default FOV. You would want to have this setting switched on.

The brightness also matters when you play an FPS game, doesn’t it? This is a personal choice. Gamers typically like to play with bright settings so that they do not miss out on any of the action in there.

We would suggest that you use the brightness and now lower it down. Sometimes, you may not be able to see your enemies as you enter dark places like a tunnel or inside a building. Unless you are keen on low brightness or playing in a dark room, please use good brightness.

The HDR might be turned off so that your brightness is not affected in the wrong manner while playing Battlefield 2042. Sometimes, it does expand the range of both color & contrast immensely.

However, you may want to know if the image can get much brighter with more depth.

Users can adjust the motion blur according to their choices. That is why we suggest that you keep the motion blur off when you are playing in Battlefield 2042. That is because it helps you to get good-quality pictures & a solid FPS performance.

The Vignette can stimulate the brightness of your camera. What this does is that it gives you the option to keep your pictures & images a bit quieter. So, you would want to keep the vignette setting switched off.

The lens distortion can be switched off. However, when you want to enable, or you would want to disable lens distortion. It is recommended to keep this Battlefield 2042 setting OFF for an optimal experience.

You may want to update your graphics driver to the latest version from Nvidia or AMD. It, of course, depends on your choice. You can also update to other Windows drivers when you don’t want to face technical issues.

Sometimes it may offer a set of new features that come for free. This is possible with the help of manually downloading them from the Nvidia website. As we said at the beginning of the post, Battlefield 2042 cannot be played on your MacBook model.

No, Battlefield 2042 is not too difficult to run on your PC device. It can run & work on any kind of PC system as the Intel & AMD chips can work with it opulently. You don’t have to be concerned whether your gaming PC is a few years old, as you should be fine.

Is Battlefield 2042 a CPU-heavy game?

Battlefield 2042 is not a CPU-heavy game. It comes infused with several features & specifications that make it a stunning game. Unfortunately, as we read, the game can be tricky when you want to install it on your old or new PC system.

Yes, you can play the game with a PC machine that has 8GB RAM memory. That should also come with the Intel processor of Core i5 6600K, VRAM 4GB, and graphics card of Nvidia GeForce GTX 1050 Ti GPU model.

The FPS on Battlefield 2042 means a lot to the game’s performance. You need to make sure that you have a powerful driver present on the PC device. That is why you would want to update your graphics driver & fix a low-performance FPS Battlefield 2042.

Sadly, Battlefield 2042 runs poorly on a top-end PC machine. So, whether you are working on a low-end machine or a powerful gaming PC device, it does not matter. You would want to ensure that the graphics card is a good one, though, because that matters a lot in the end.

Battlefield 2042 is an exciting game that comes infused with outstanding features. There is plenty of excitement & fun when playing the game. You can find the game enjoyable if you are a professional player.

There are some technical issues with the game at the moment, and you may want to ensure that you follow some tutorials given online to help you solve them. You can take professional help if things get out of hand.

So, what are you waiting for?

Go ahead and play the game on your PC today.