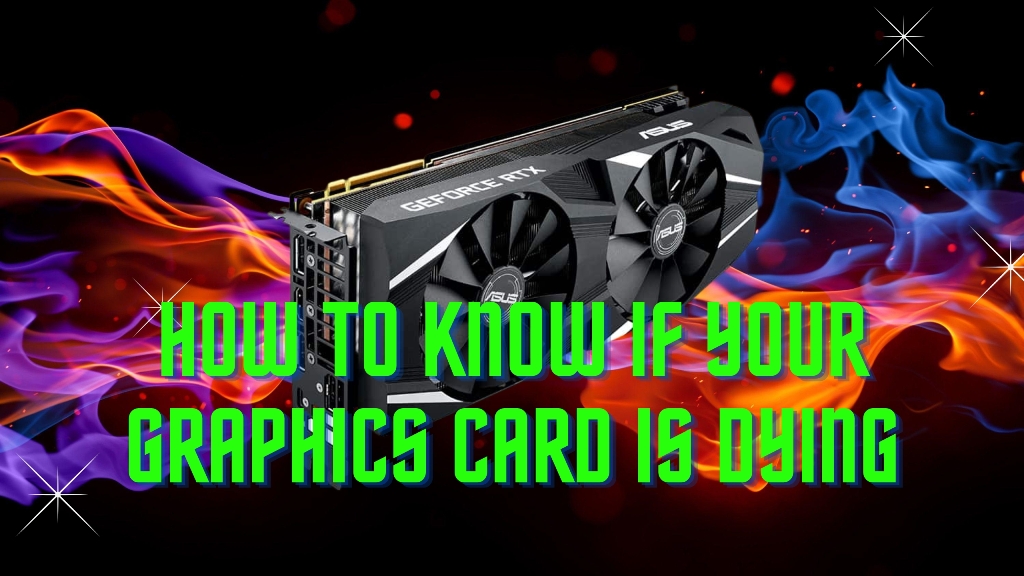 There is nothing worse when your hardware fails you. It could, perhaps, be when you need to prepare an introductory presentation for a client or want to play your favorite video game. These things happen.

But it can hurt more when the component is your GPU model in your PC device or your laptop. Any user will know that the CPU & GPU are the most critical components of a PC device or laptop.

When they stop functioning correctly, then you know that the device is destined for ruin. Besides, the GPU model is one of the most expensive components of the PC or laptop. When they take more work, they get damaged badly.

In this post, we are going to briefly be discussing about some signs & solutions for a GPU that is dying. We have also provided you with some ideas that may help temporally fix the problem. Like any PC component, graphics cards are prone to damage; here are some things to look for.

Signs & solutions for a graphic card that is dying

You know that your graphics card is reaching its end when your graphical issues become worse. In this sense, you are barely able to see clear visuals and images. There is plenty of shaking and haziness on your monitor.

These graphical glitches come up and are a sure sign that you have to replace your GPU model. Besides, watching movies and doing your regular tasks using a hazy screen is not advisable because it can cause eye problems later on.

Moreover, you are only causing more unintentional damage to your PC machine. It can be extremely frustrating when you are playing games as well. Not to mention, you can see poorly rendered text and similar artifacts.

So, when the glitching has begun for no apparent reason, you know that the end is near. You may want to clean your GPU from dirt & dust. At times, this might provide you with temporary relief to your PC machine for a few days at the maximum.

The second cause would be when you hear some strange noises coming out of your PC case or your laptop fan. As you know, mid-range models come with a noiseless fan. Though you can feel them working, they do not make too much noise.

Unless you are using a top-end model from Asus, Gigabyte, or MSI, you may hear them roar loudly once in a while when you put pressure on them. This happens when you are playing top-end games or performing high-end tasks like graphic designing and so on.

But for no reason, when you notice a consistent noise from the fans, then you know that the GPU model is dying. It is not reacting well to work and function. They are getting under load without any form of pressure.

At the most, you can change the fans, but you never know how long this solution might work for your PC device or laptop. When you do not change the fans, then the dying GPU might make them work harder and cause more damage to other parts of the device.

3) Increase in the system crash

When there is an increase in the system crash, then you know that your GPU model is nearing its end. Your PC device or laptop keeps frequently crashing and rebooting by itself. While this is very annoying, you will want to know that there is something wrong with your GPU model.

You will want to look into it immediately. This is when you will want to troubleshoot and see if your GPU unit is working properly. System crashes can be attributed to other factors as well. The PC crash and reboot can be caused due to several reasons.

But you may want to troubleshoot your PC device and then move forward with things. You can remove the components and check them if you know how to do them. Otherwise, you can also verify if there are some other issues bothering your device.

4) There is a significant drop frame

You can see that there is a significant drop in the frame of your images shown on the screen. When this happens, you know for sure that it is related to your GPU unit only. Unlike the above reason, where your PC machine crashes and reboots, this one is a very sure sign of a graphics card dying.

For example, when you are watching a movie, and instead of running at 50FPS, the monitor is showing you 15FPS, then you know that there is some issue with the GPU model inside your PC case.

However, it could sometimes be also due to thermal throttling, but this is rare. You need to be able to test the temperature in your graphics card. When they are okay, then it is alright. However, when the fan noises are not ideal, then you may know that there is a disaster waiting to happen.

When your OS crashes, then you may see a blue screen at times. This could be another reason for low FPS and not even being able to boot it back up again.

5) The blue screen at the end

There is no other solution to this sigh. Some of you might have noticed a blue screen flashing on your monitor. When this is the case, you know that your device is pretty old, and it would be best for you to get a new PC machine or laptop device.

Supposing your OS crashes, then you may want to check it out and see if the PC is working or not. However, it may show errors during the booting up itself. When you are struggling to get results, as we read in the third sign, then you may rule out other bad components and troubleshoot before replacing your GPU model.

What must you do when your GPU gets damaged? 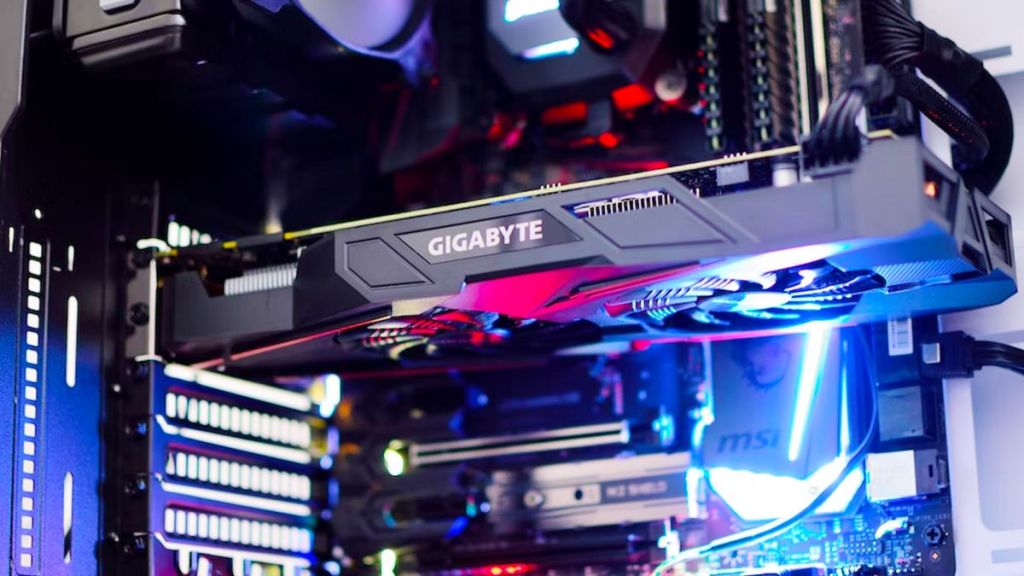 It would help if you replaced it, simple as that. This can be nerve-racking for most users, as they might be emotionally attached to your components. But that is how it is. You either have to replace your GPU model on your PC system or get a new gaming PC machine or laptop.

You do not want to keep using the device because you are only going to do further damage to the other components that are present in the machine. However, like we discussed, you can always give it try to repair the GPU unit.

When the fans are faulty, you only need to clean them, and the GPU model is as good as new. Likewise, you can clean the interiors of the PC case and notice the changes. If it still doesn’t work, then you will have to replace the machine itself.

Please do know that replacing the entire PC machine can be an expensive and cumbersome affair. You may have to ask for professional help, and at times, the price can go beyond actual devices.

In technical, a flawed GPU model is called as a dead unit. Even though you may fix it temporarily, things can go bad at any moment. Most of the time, it may work for a day or two. We are giving you some suggestions, in case you are particular, but we don’t recommend these methods.

How long do graphics cards last?

Usually, a top-end GPU model can last 5-6 years or more, depending on your usage. Typically, GPU units are used to provide images for browsing, reading & writing, and watching movies as well.

However, when you are a professional gamer or somebody who is a graphic designer, then you may require a high-performance GPU unit. When you make use of a mid-range GPU model, then it can last at least 3 years for you.

How do graphics cards go bad?

There is no specific reason for the GPU model going bad. The primary cause for the graphics card going bad is due to the overheating problem. Sometimes, when they overheat, then the GPU model finds plenty of dust & dirt clogging the heatsink in the cooling fan, getting damaged.

When should a GPU be replaced?

Like we said, a GPU model can last for 5-8 years, depending on your use. When you make use of the GPU unit frequently for high-performance tasks, then you may need to replace a top-end model within 4-5 years.

Like we said, a GPU model can last for 5-8 years, depending on your use. When you make use of the GPU unit frequently for high-performance tasks, then you may need to replace a top-end model within 4-5 years.

How do I know if my GPU is underperforming?

You can find your GPU underperforming when you see a video or a task taking too much time loading on your PC or laptop. This takes a lot of your PC’s memory. Moreover, the fan tends to rotate quicker and makes more noise than usual.

It does not matter whether you are using an internal or external GPU unit. When you are playing video games or watching movies, then the images will shake and become somewhat hazy, which is why your PC may crash due to the overload.

This is it. We have ended our discussion on the graphics cards dying. We saw a few reasons and some solutions that may help you. However, we cannot guarantee success in most of the methods because the GPU model specifications and life may differ.

Besides, it also depends on your usage. We may suggest that heavy GPU users like programmers, coders, stock traders, analysts, and professional gamers use top-end GPU models. This reduces the repairs and increases the longevity of the PC machine.

You do not want to overburden your PC device by using a GPU that is dying or damaged. You are only causing more damage to your PC or laptop device. When your PC or laptop is more than 8-10 years old, you might consider replacing the entire device and purchasing a new one.

We hope you benefited from this post and know what to do next time you have an issue. Please, feel free to share this article with your friends, colleagues, and interested parties who are keen users of PC devices and laptops.