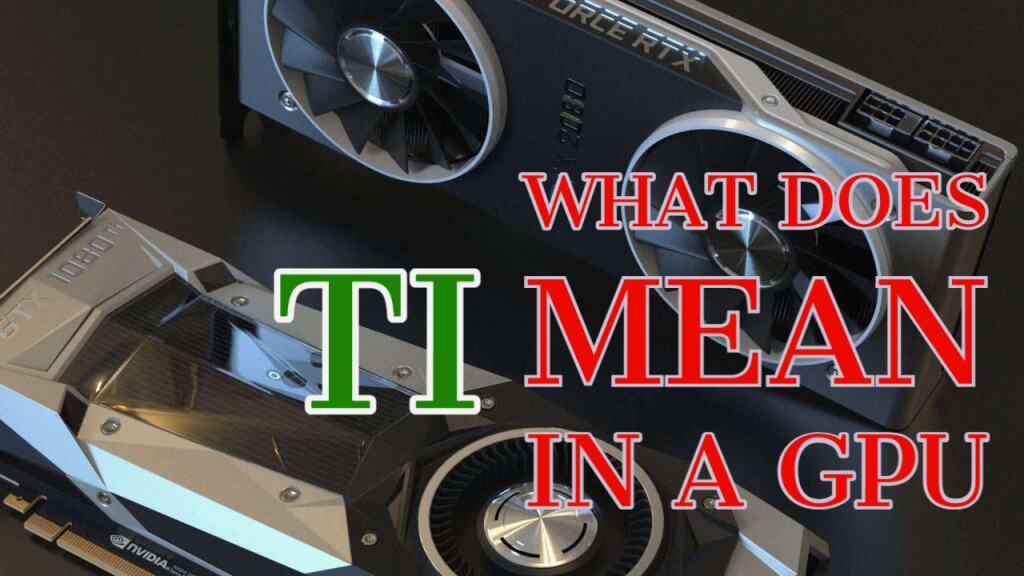 So, what does the Ti mean in a GPU? If you have worked on a PC or laptop before, then you might have heard of the term GPU or graphics processing unit. The GPU is an essential component of the PC because it helps provide you with a breath taking performance.

It helps enhance the performance of the gaming PC or device that you are using currently. However, you might consider using the Ti model when the performance is lagging and you are not satisfied.

This is when you may want to know that getting a GPU model is not a cheap activity. There are several high-end models that can cost you a lot. Moreover, each comes with its own brands, models, suffixes, and the like that may sometimes deceive you.

You would want to know how to differentiate between them to choose the best model for your cause. Let us read this post to help us understand more about the Ti present in the GPU models and what they mean.

Here is a small guide to help you learn and know more about the Ti in the GPU.

What does Ti mean in a GPU?

NVIDIA is a manufacturer of GPU models in the market. The brand has been present in the market for several years now, and they are doing a fantastic job. It is quite evident from the sales figures for each year.

The last two years have seen a significant increase in the number of sales globally. You can know that you are getting a good product when you are purchasing their GPUs. So, what is the Ti in them?

The Ti is known for the Titanium model of GPUs sold by NVIDIA. The next time you see the Ti present on the NVIDIA GPU model, then you know what it stands for. But what does it do? Is there something special about the particular model or unit?

You would be astounded to find out the specifications are almost the same. However, the model’s Ti version comes with more infused power. In this sense, it comes with more CUDA cores and memory.

The Ti model has 10,240 CUDA cores, while the non-Ti unit has only 8,704 CUDA cores. Additionally, the memory is better, too, with the Ti unit having 12GB and the non-Ti model having only 10GB.

What is the difference if your GPU is labeled as Ti?

As we said at the start of the post, the top-end models of the Ti GPUs can be quite expensive. They cost a lot compared to the non-Ti GPUs. The NVIDIA GeForce RTX 3060 comes priced under $330.

But the Ti version of that model is under $400. That is almost more than $70, which is a lot for a budget user. Of course, when you have deep pockets, it might not make any difference. But for most users, it means something to them, is it not?

We have another unit. The NVIDIA GeForce RTX 3080 is priced under $700. However, the Ti version of the model is priced under $1200. We can see a price difference of almost $500, which is definitely a lot of money.

However, when you are keen to make use of the juice present in the Ti model than the non-Ti unit, and the price is affordable for you, then you can go for the kill. You see, having the additional performance comes in handy.

That is because the model is quicker than most of the ones that are priced under $1300. So, you do not have to get the units that are priced way higher, like the RTX 3090 Ti model. We suggest that you do some research on the model that you are considering before buying.

Which is the best Ti graphics card?

Currently, in 2022, the best Ti GPU model would be the RTX 3080 Ti unit. It is not only quite powerful but can provide you with a similar performance to the top-end models like the NVIDIA RTX 3090. You can read the detail comparison of the Nvidia GeForce RTX 3080 Ti and NVIDIA GeForce RTX 3090.

Besides, you also have the awesome AMD RX 6900 XT that comes with smashing success. Moreover, the RTX 2080 Ti GPU was the fastest in the market a few years ago until they were done by the new “RTX 3000 generation” GPUs.

Yes, they are an expensive lot, but when performance is your requirement, then you will want to make use of these GPUs. They are quick, reliable, and powerful. Some users have highly recommended them for professional gamers to use.

How do NVIDIA cards compare – Ti vs non-Ti cards?

This is going to be an interesting comparison. So, what could be the main difference between the two GPUs? As you would know by now, the Ti version of the model comes quicker and much faster.

Though the model number is the same, the Ti unit is the fastest. The Ti model will come with more shader processors and computational cores. The CUDA cores are an essential component of the GPU unit as they do several video rendering activities.

It is largely responsible for offering the visual display on the gaming PC and device that you are working on. When the GPU has more shaders, then you know that the performance is going to be outstanding.

What is the best way to find out the performance of the GPU models?

The ultimate method to determine the GPU models’ performance would be to notice how good the video card goes. This is for real-world benchmarking purposes, and you can understand that they come really well at that.

You can install it inside your gaming PC and find out the number of framerates that are present in it. Besides, you can keep an eye on the game or activity of interest. Perhaps, you are a graphic designer or video creator.

Of course, this method may not be possible for potential buyers so that you can look at the GPU models’ benchmark scores.

What are graphics card benchmark scores?

The GPU benchmark scores are the scores or numbers that have been given after putting the GPU through a test. Several tests are done to determine a GPU model’s performance. While most of the tests see a slight difference, some tests show the absolute truth of the unit.

Scores are given through the benchmark software that is tried and tested by professional users. They test the hardware features and specifications of the GPU and then write down the scores got in its performance.

Sadly, the numbers do not mean much unless you want to compare them with most of the other models. These models could be from the same brand, make, and price range. However, when you compare them with other brands and models, then it could provide you with a clear idea of the model to go with.

Ti GPU Average Benchmark Scores For Some of The Popular Games

We have compare the average benchmark score for some of popular Ti GPU. Check out the performance of the most popular PC games like WORLD OF TANKS, WORLD OF WARCRAFT, DOTA 2, MINECRAFT, THE WITCHER 3, BATTLEFIELD, OVERWATH, LEAGUE OF LEGENDS, GTAV, PUBG, FORTNITE and CSGO. 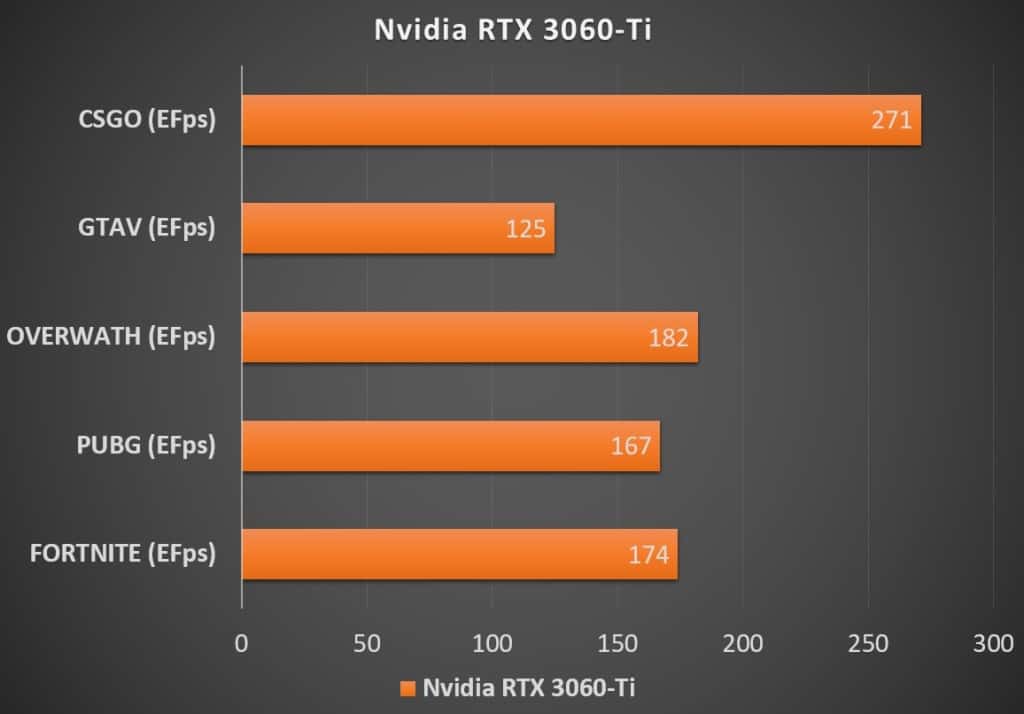 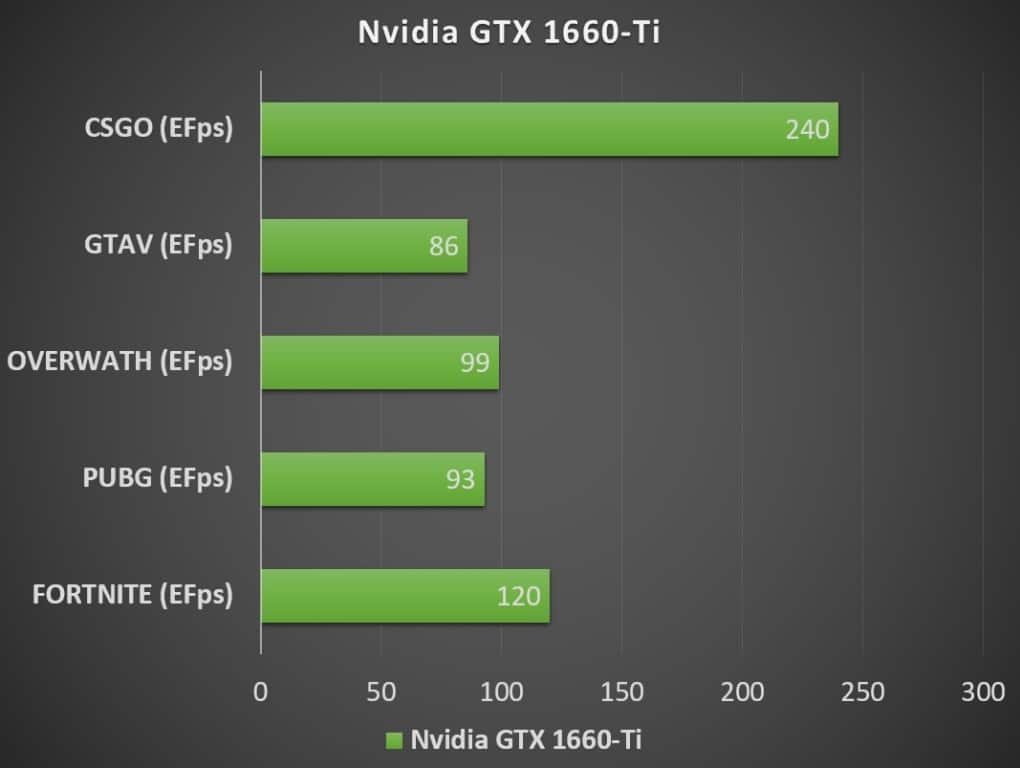 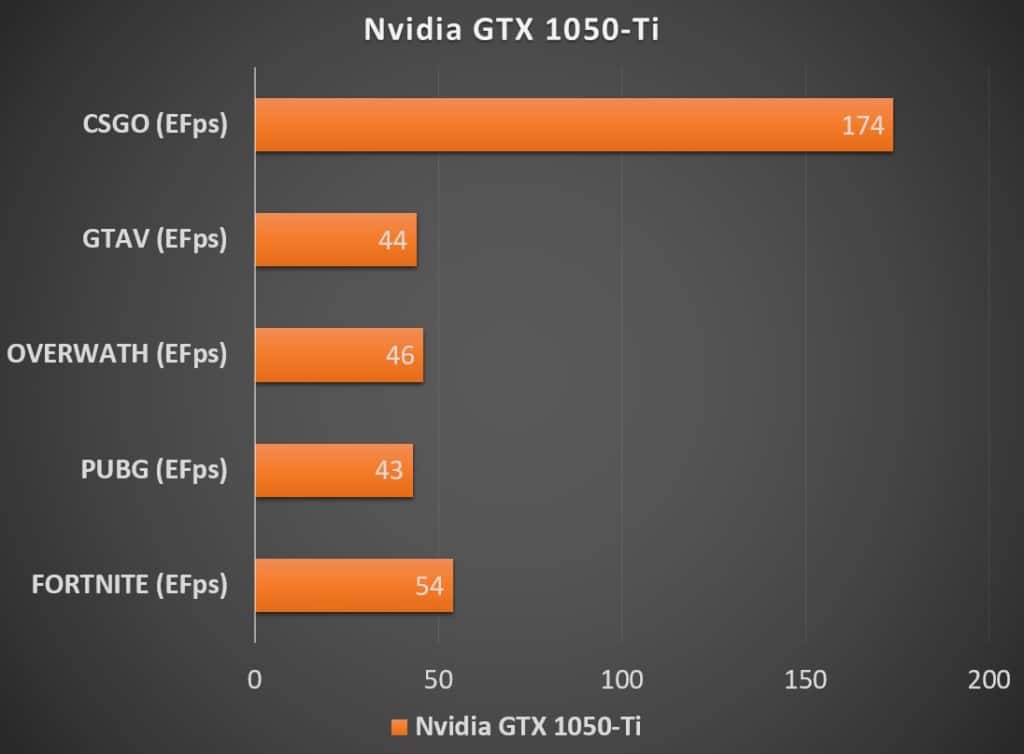 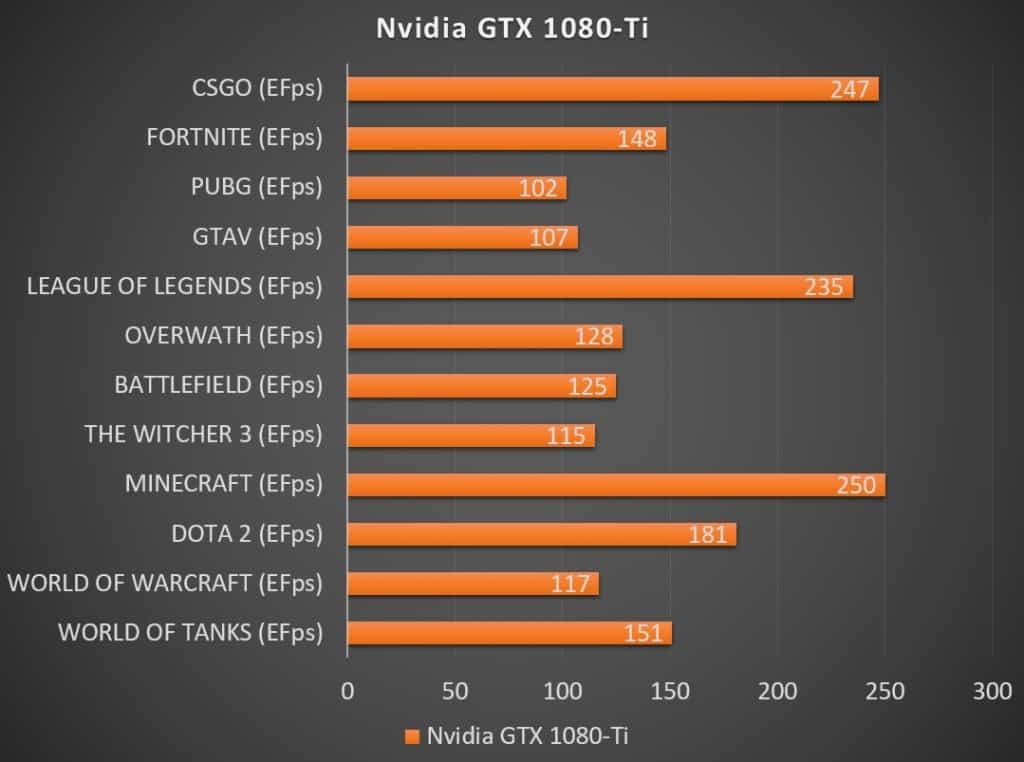 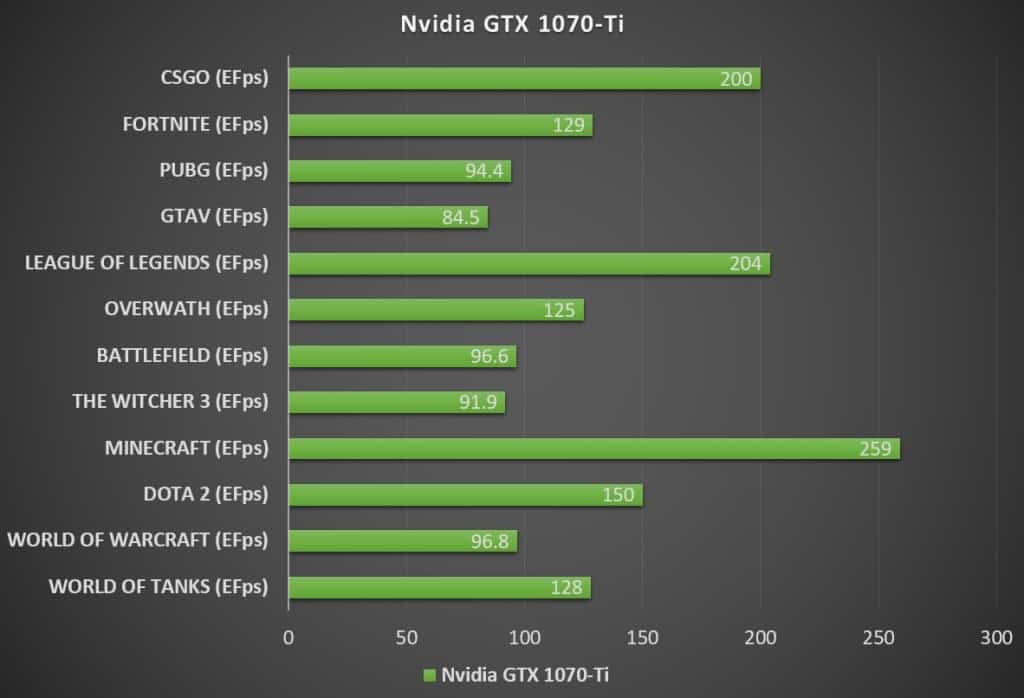 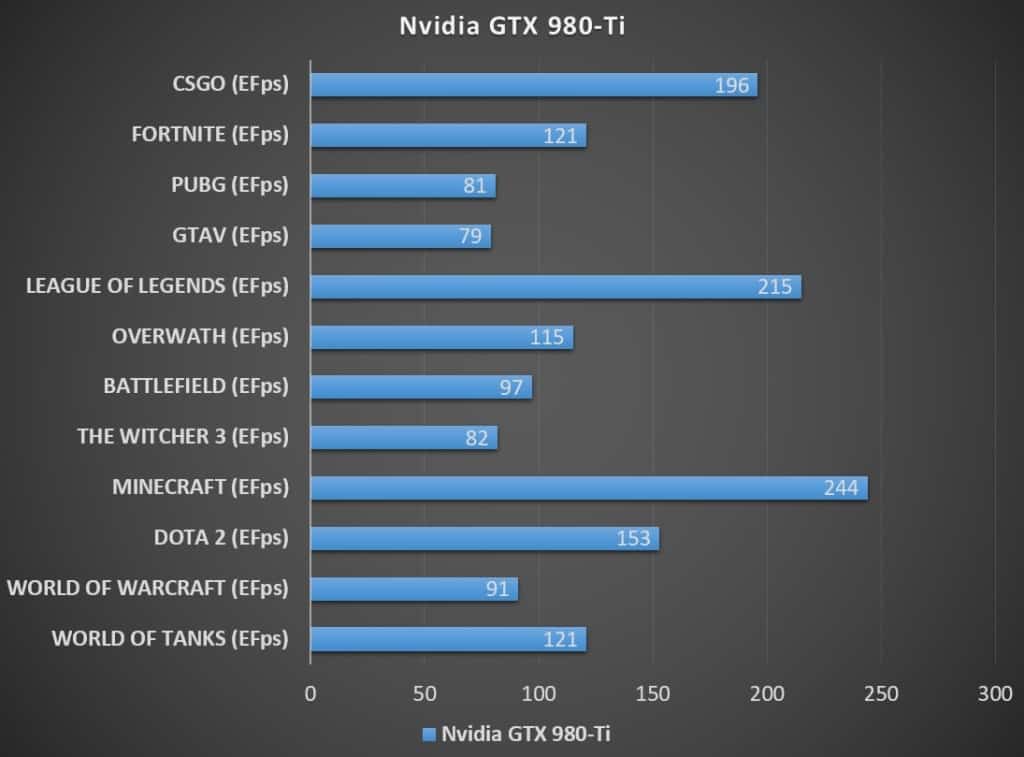 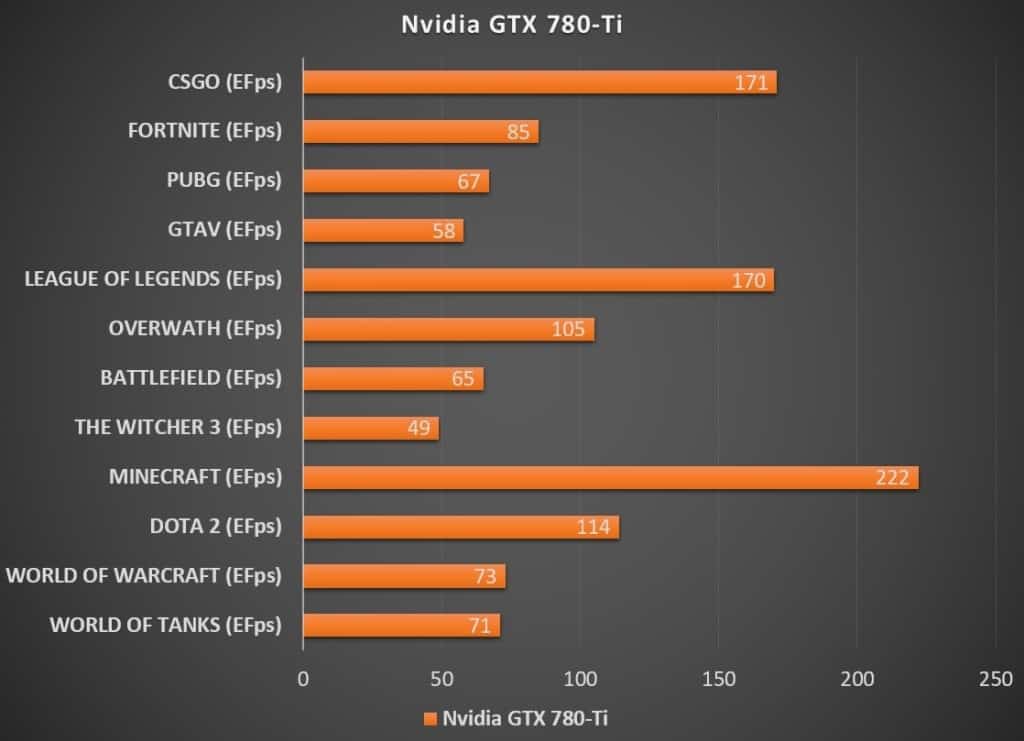 Another method to know the performance of your GPU – YouTube videos

This is an exciting test that you can try if possible. It is known as the YouTube test, where you place the GPU performance in running videos. It is not surprising to see several users loading the games and noticing the speed at which things happen using the GPU model.

It offers you with the framerates at which the GPU is running and working. You can see the titles of the games present on the hardware itself. Seeing these kinds of videos can provide you with an idea of the stuttering, aliasing, and FPS too.

Besides the GPU unit, the CPU is also the most important part of your gaming PC or device. These can immensely affect the gaming capability of the PC. To know that, you can search for the “<graphics card model> <CPU model> <game title>” on YouTube.

The Ti cards, if available where you are residing, are a worthy product to choose when you are planning to upgrade your PC or device. Some of the GPUs might be slightly expensive than the others because of the additional performance that you can extract from them.

Besides, we also saw how these GPUs could do well when used on YouTube and other video rendering tasks. When you are a professional gamer and are on the lookout for a powerful GPU, then we suggest that you try out this method before getting the model for yourself.

We have come to the end of our post on what Ti means in a GPU. We hope that you liked what you read and understand what it means for you. Ti simply means additional performance. The Ti model can enhance your activities if you are a regular user or a professional gamer.

If you have not used the Ti GPUs before, then we suggest that you utilize a mid-range version first and then move on to a top-end GPU model. That way, you can slowly get used to the experience when gaming or browsing on your PC or device.

But the premium GPUs will cost you a similar amount to that of a high-end gaming model. When the money is not an issue, and you feel that it can serve your cause, then the Ti GPU model is definitely going to be a worthy investment of your time & money.

Those of you looking for other options can always make use of the budget PC models. You might want to opt for the low-end models that do not cost an arm to design. The performance is almost good. Having the Ti unit on your side as it comes with the FPS is fantastic.